Hello Starfish in the Sand

We checked the tide table/chart to ensure we went to Lang Bay during low tide to see all the critters.  We were not disappointed.  We saw starfish, crabs, sand dollars, mussels — all very exciting for prairie folk. 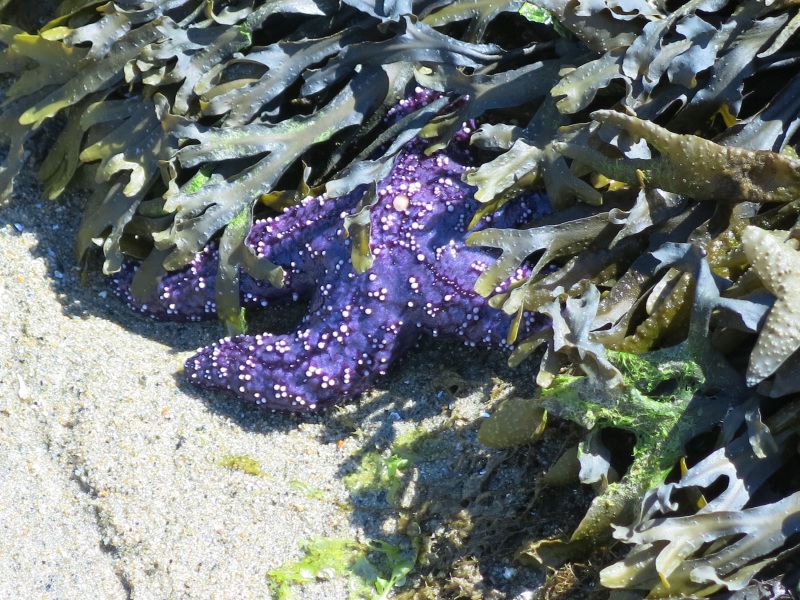 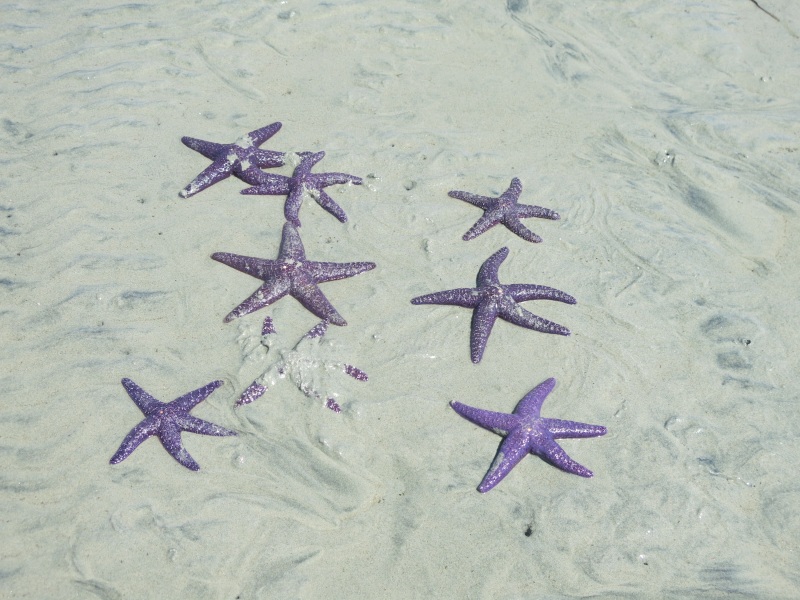 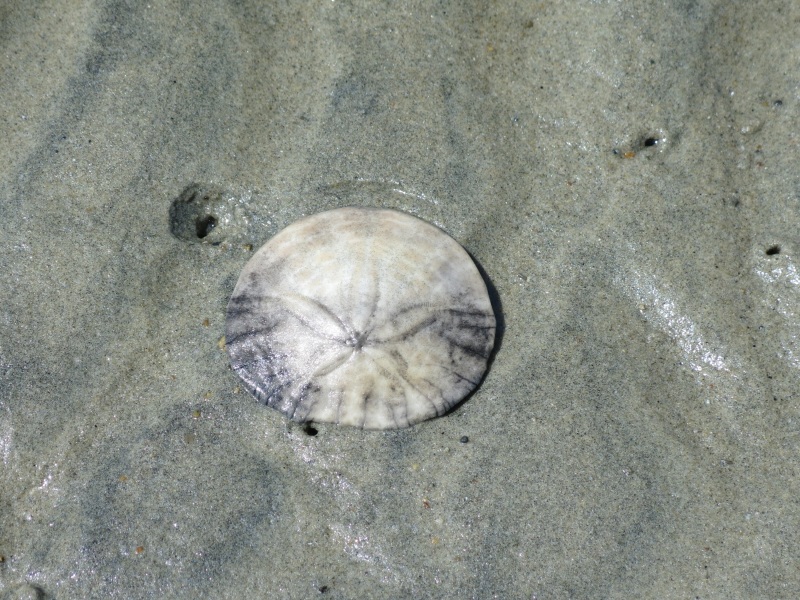 This crab had seen better days. 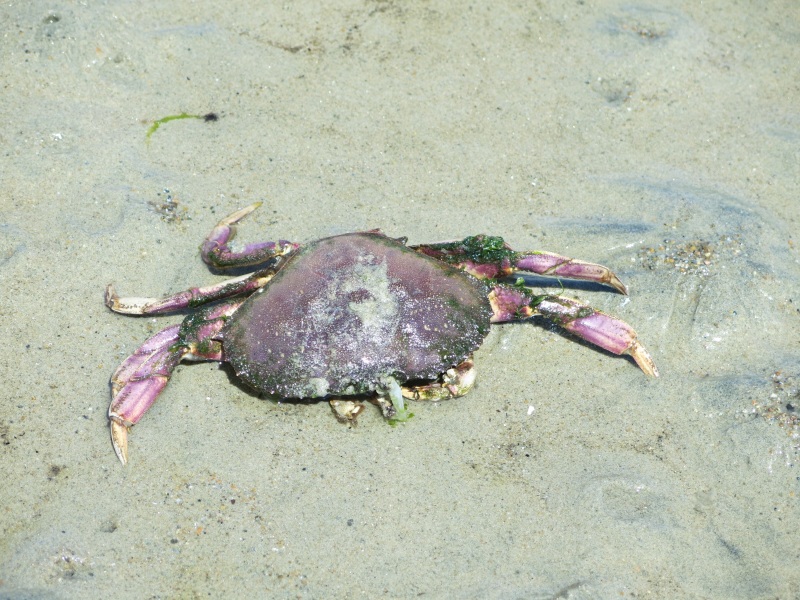 I love this twisted tree. 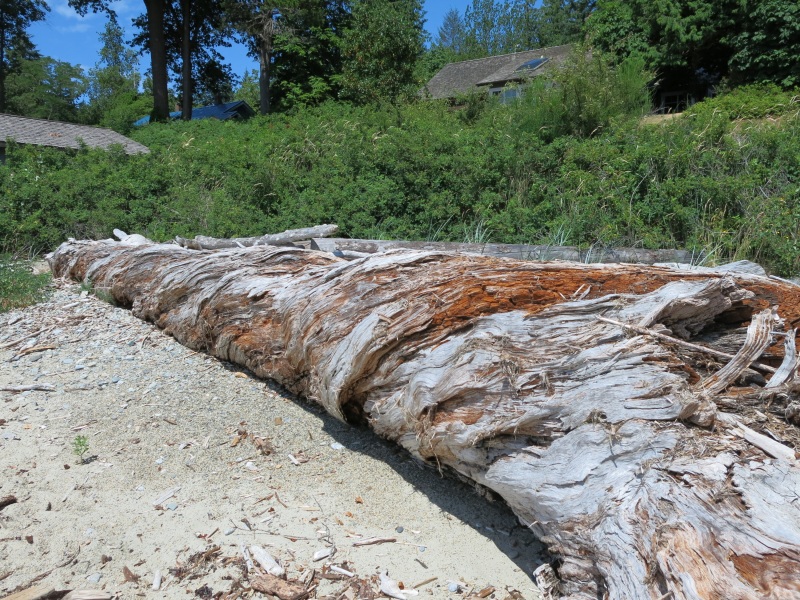 Daisy is ready to take flight.

But Poppy wants to dig deeper.

Tomorrow is our last full day here.  There is still so much to see, so we have to choose wisely.

We packed some snacks and a change of clothes (in case we got wet) and headed out for another adventure. The Bike Race was on in full force.  We watched as some heats left down the trail near our campsite, but we didn’t wait around to see who won. There are contestants from around the world. Last night, we met people from California who were cheering on a family member, and camped next to us is a couple from Switzerland who are cheering on a friend. Who knew this was happening here?  Not us!  This is a big deal.  There were 4 semis carrying the bikes, several shower trailers, toilets, massage tables, charging stations, and sponsor displays — all changing locations every couple of days for this race.  The participants pay $2000 to compete, but it pays for a moving city! 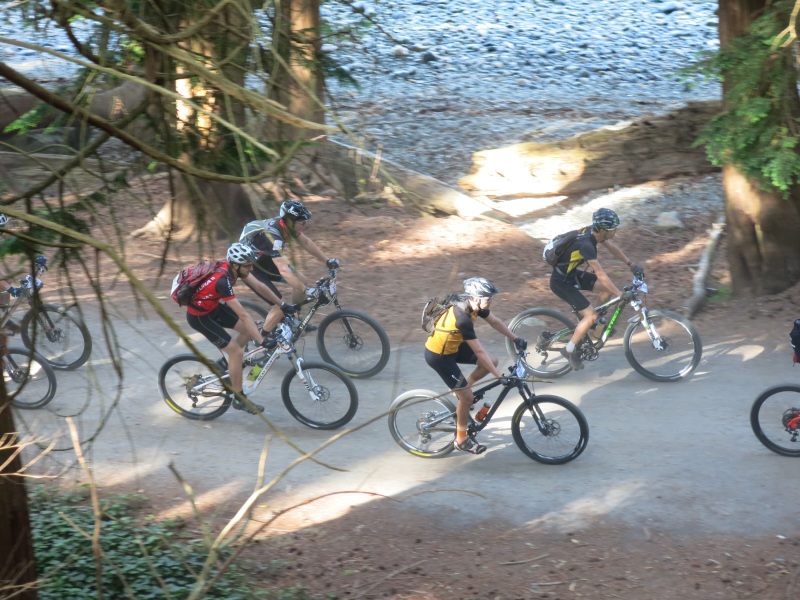 We stumbled upon Powell Lake accidentally today. I had first heard about it in a blog.  A couple from California had come here for a visit and fell in love (I understand completely).  They bought a float home on the lake and moved here permanently when they retired.  They started the blog and wrote some e-books about Powell River.  They provided my first introduction to this place.  Out on the lake, I’m sure I glimpsed their float home, but we didn’t sail in closer to check. This lake is huge. 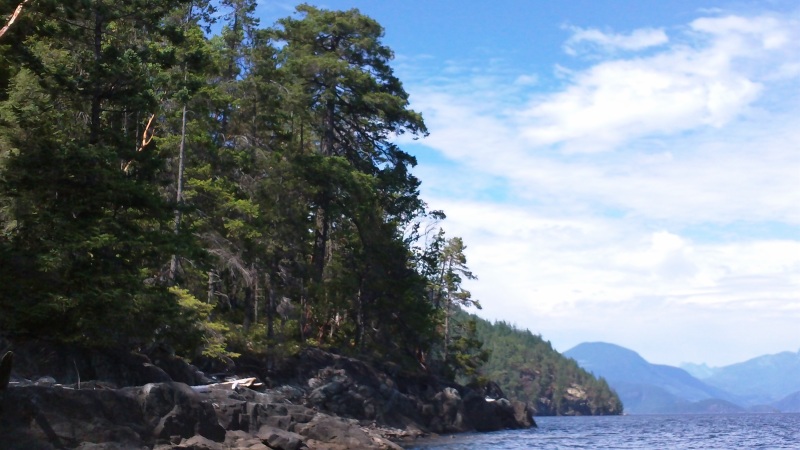 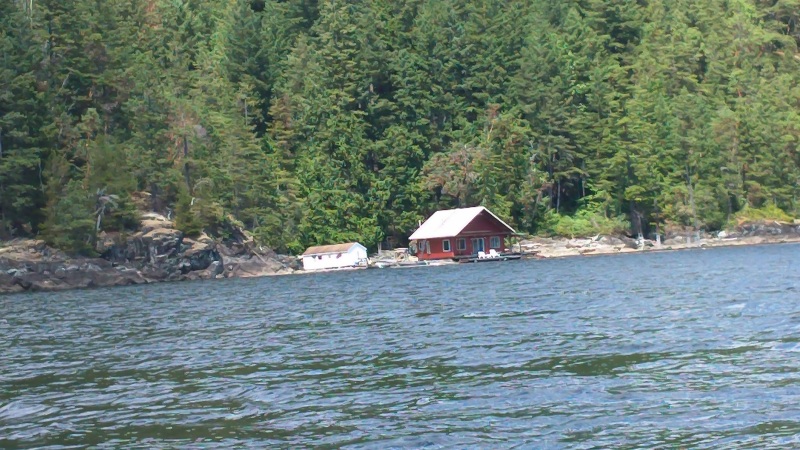 How do you renovate your float home?  You hire a barge to bring your lumber and generator.  This is what we saw while we were leaving:

We had an incredible day. Daisy was feeling well enough to come along with us. Both girls are exhausted from all their fun in the sun.

We had dinner at another fantastic oceanside restaurant called Coastal Cookery.  People were taking pictures of their meals, but neither of us brought a camera.  Our meals were beautiful as well as delicious.  I had local tuna — pan-seared, but raw inside.

Tonight’s final picture is a trail at Valentine Mountain.

Tents, Palms, and a Whale

Daisy has been sick for the past couple of days, so we haven’t been too active.  She did have a big walk yesterday because she seemed well, but she was still sick.  Poor little thing.  Today we took it easy for her sake.

After lunch, we drove to Lund, which is at the end of Hwy 101.  We heard that a campground there may be for sale.  What a sweet campground!  This one is fairly perfect, but due to its location, we are not sure if it makes much money.  The owner has also built 2 cabins and converted a shed to a sleeping shelter for kayakers because once kayakers had arrived wet and tired and needed somewhere to crash.  They asked if they could sleep in the shed.  After that, he fixed it up into tidy quarters.  There was a couple using it today.

We stopped in at a beach that we had heard has good access for kayaks.  While we were checking it out, we got to see an orca spouting water and playing around.  Of course, I couldn’t get any worthwhile pictures.  However, it was mesmerizing to watch.

When we got back, the ferry was coming across the strait from Vancouver Island.  The town was abuzz with excitement because the racers from the BC Bike Race were on the ferry.  Many people from town go down to the dock to welcome them, so we went too.  It was almost like a parade as the racers disembarked. 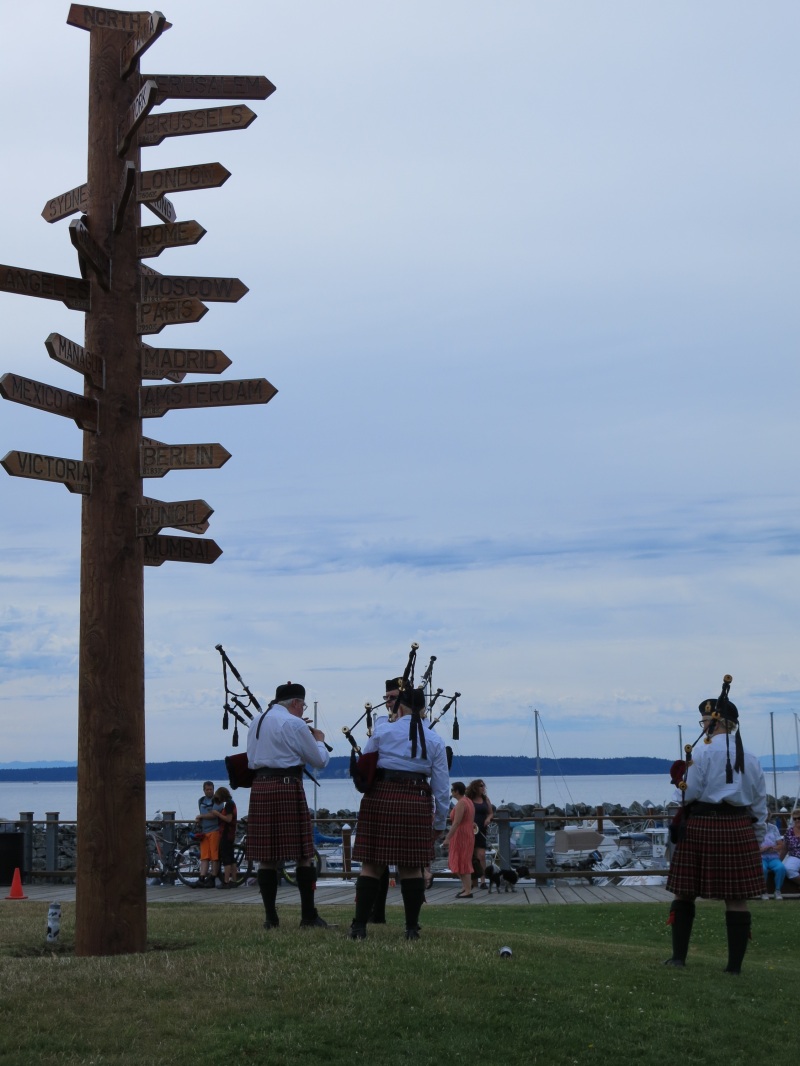 Their gear travelled ahead of them.  During the afternoon, the race staff assembled tents, set out the luggage, stored the bikes, etc.  We were shocked to see that Willingdon Beach Park had been transformed into a tent city! 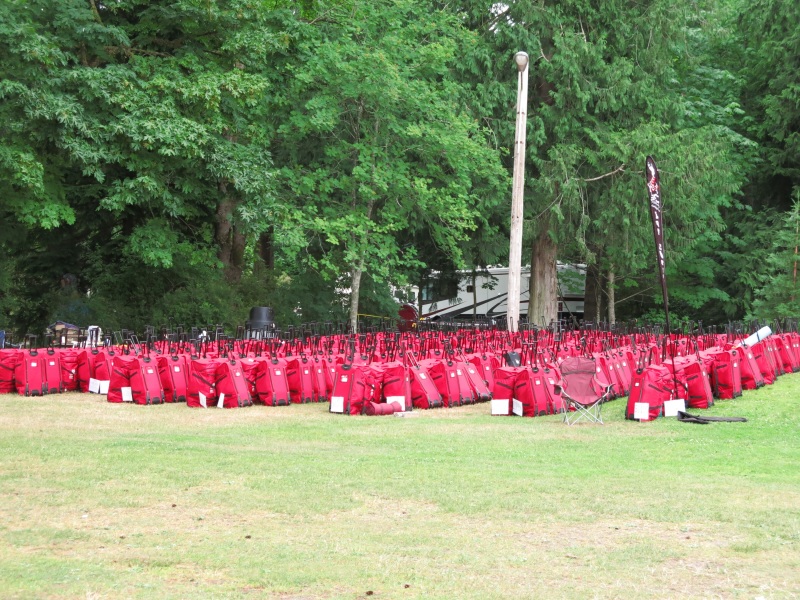 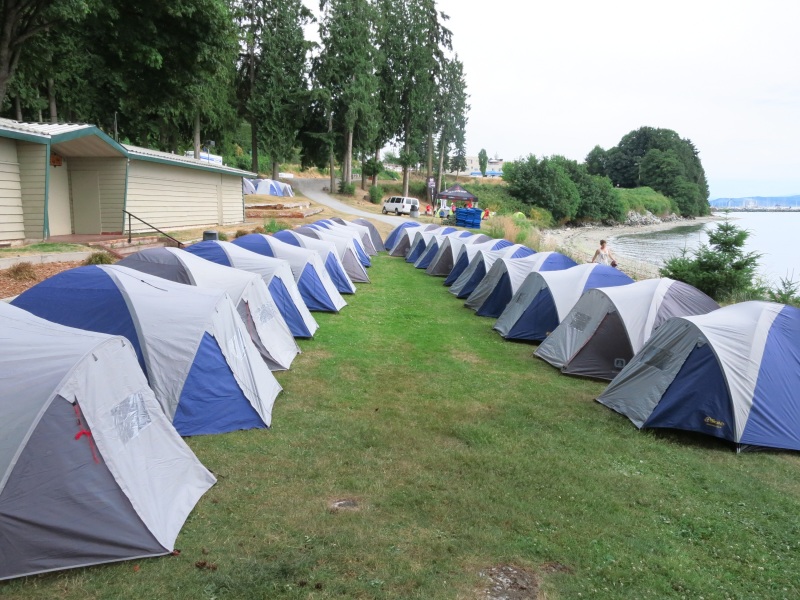 And finally, yes, there are palm trees here!

This morning, we drove to a few neighborhoods and beaches.  While we were getting ready, the girls were snoozing in the quiet of the campsite:

We have both forgotten the name of the first beach we visited.  It is south of Powell River.  We met a man originally from Germany who was out for a bike ride.  He is 80 years old and looked 60.  He biked the 10 km there for exercise.  He gave us some ideas for businesses.  For example, he said many people heat with wood, but it is hard to get wood delivered.  He said a pick-up truck and a chainsaw and an agreement with the paper mill is the start-up.  He also said that there are many opportunities for people who want to provide services for seniors.   Unfortunately, I did not get to talk to him as long as Paul did because I was cleaning up Daisy’s “tossed breakfast” all down the truck door and on her bed.  Poor baby. 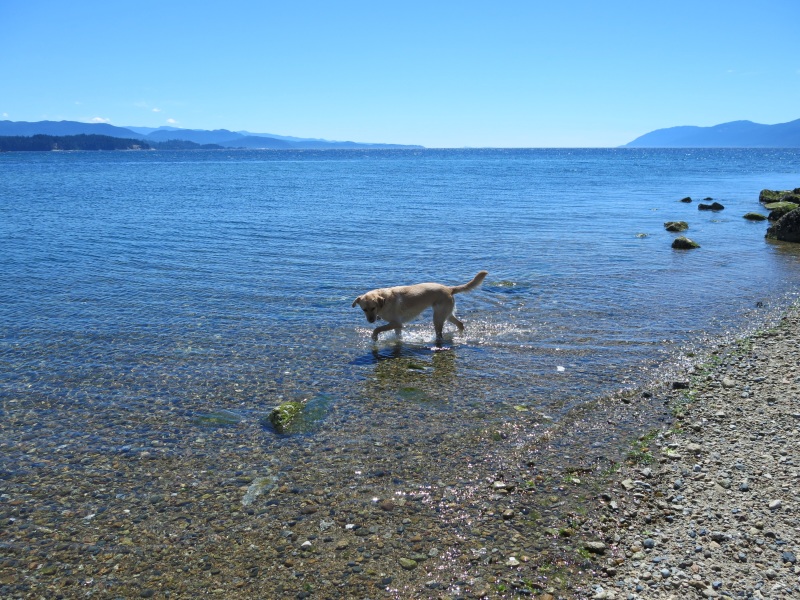 The next beach we went to was Palm Beach.  In case you are wondering, there were no palm trees there, but lots of houses and businesses have palm trees on their properties — planted, not in pots.  Really!

This picture shows how dry it has been here.  The grass is dried out everywhere.  There hasn’t been any rain.  It looks like Saskatoon in August. 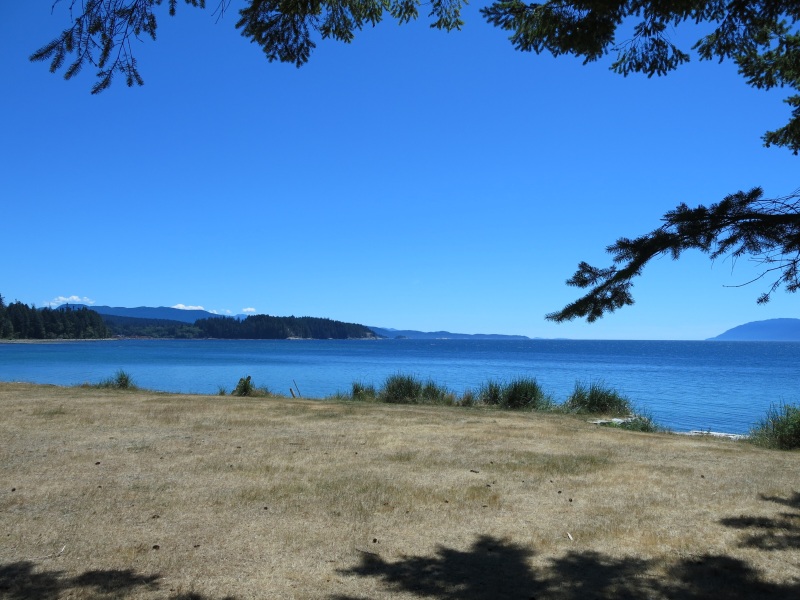 The ocean, like Lake Diefenbaker, defeated us again!  Did it see the Hobie coming?  We had no wind, but we still went out today.  We launched at Willingdon Beach (with some difficulty), and travelled north until we came to the old Townsite where the city installed concrete ships as breakwater.  Our friend Gregory had told us about these and sent pictures from his visit.  We weren’t sure if we could get up close, but some women on the beach near the Townsite said we could, so off we went.  There is one by itself, which we were able to float right around.  The others were closer to shore.  These were war ships.  This grouping forms the largest breakwater of its kind in the world.

Poppy is gettiing a better look. 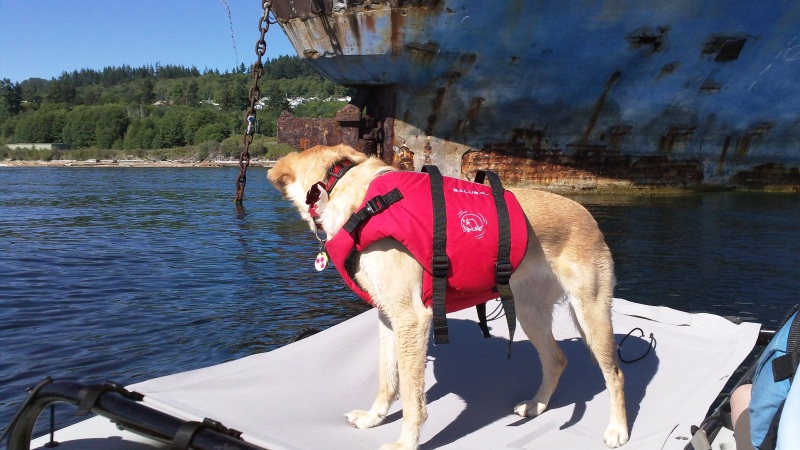 The rest of the hulks: 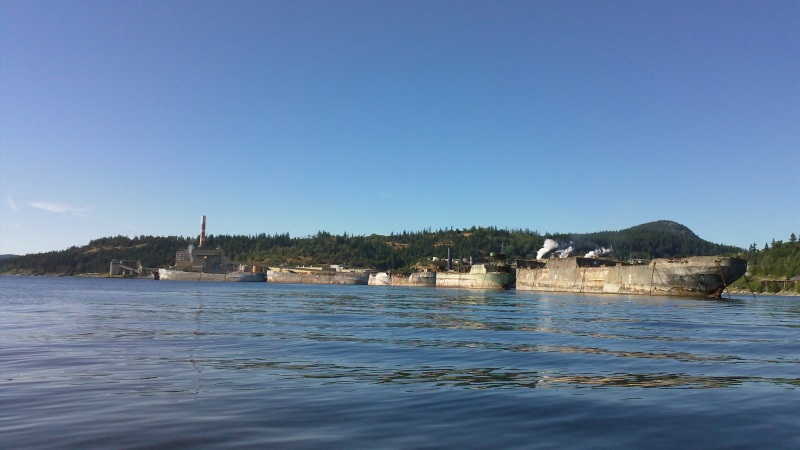 Daisy hadn’t been feeling well earlier, so she stayed home.  Poppy was pooped and tried so hard to sleep on the trampoline, but couldn’t: 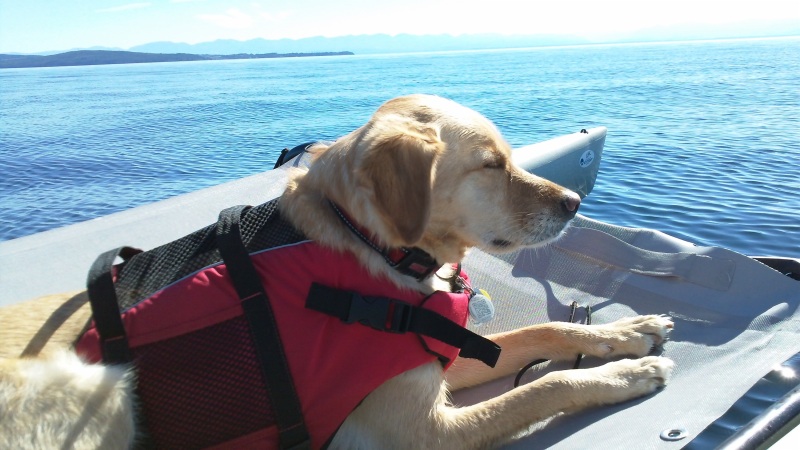 Of course, she got to go “cracker dog” at the beach near the Hulks, and that added to her sleepiness.  Here is the Hobie beached near the Townsite:

This is Powell River’s motto.  Any town that chooses a motto like that deserves a visit.  How could we resist? Currently, the town is trying to attract people to move here.  They constructed a website which includes interviews with newcomers.  Most people telecommute or start a business because there isn’t much work here.  You can’t beat the natural beauty.  It feels quite tropical here, but maybe you should take that with a grain of salt — I’ve lived on the prairies for 20 years now.  We did laundry and hung it to dry, which took most of the day, even with the ocean breeze.

Our campsite is on the ocean, but on a cliff.  There are some sites down below, directly on the water, but they are close together.  Ours is shaded by gigantic cedars.  We can see the water sparkling and hear the waves lapping at the shore.  It can’t get more peaceful.   The two ferries were not wrong.

This is the cliff behind our campsite.  At the bottom is the Sunshine Coast Trail, and beside that is the ocean. 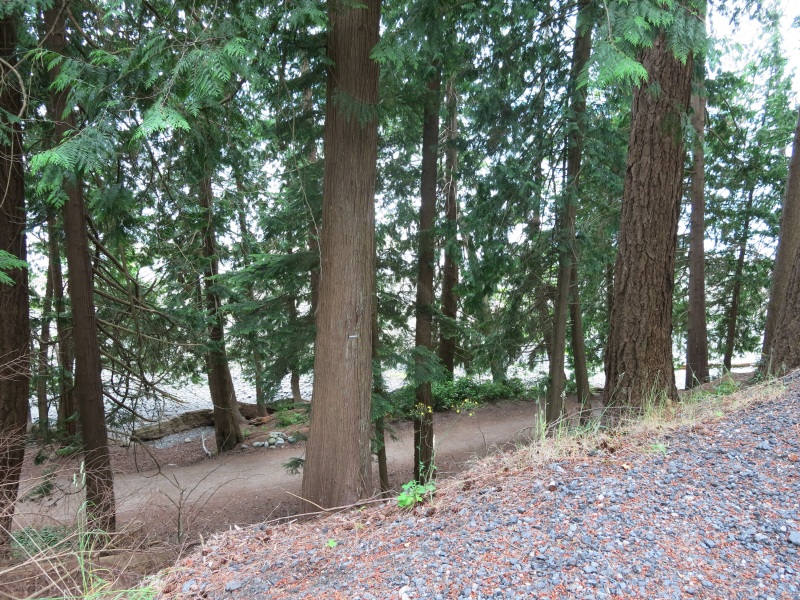 We have reached the beach!

We made it to the beach:  Willingdon Beach, Powell River

We took the first ferry from Horseshoe Bay to Langdale.  We were parked next to the big logging trucks on the lowest level.  The ferry loading and unloading was slick.  They kept everyone orderly and moving quickly from each side to keep the boat from tipping.  It was very well orchestrated: 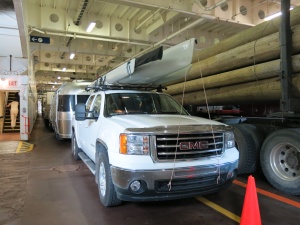 Here are the foot passengers getting off first.  They lined up in front of our truck.

The first ferry ride was only about 40 minutes.

Then, we drove up the lower Sunshine Coast to Earl’s Cove.  We took the Earl’s Cove ferry to Saltery Bay on the Upper Sunshine Coast.  That ferry ride was about 50 minutes.  I had taken motion sickness medication (which wasn’t needed at all), so I feel asleep before we had even started moving.  Darn.  I took a few videos of us loading and unloading, though.

Here we are lining up for the second ferry:

We arrived in Powell River on Wednesday (yesterday) at around 5 pm.